Meet the cast of C’est la Vie (or Smiling at Life): Joel Perkin

Joel has been doing theater for 25 years, mostly acting in musicals and Shakespeare, and loves that he has a chance to help blaze a trail in virtual theater. Favorite roles include Jesus in Godspell, Friar Lawrence in Romeo and Juliet, the Beast in Disney’s Beauty and the Beast, Michael in Dancing at Lughnasa, and Man in Chair in The Drowsy Chaperone. In March he performed as Daddy Cane in Bright Star at Tryon Little Theater. He’s also directed several shows, most recently Almost, Maine and The Humans at Tryon Little Theater. When not helping teachers increase student achievement, Joel runs lines with his cats in Landrum. He is excited to be a part of his third Zoom Reading with the Proud Mary Theatre after Blue Camp and The Vultures.

Our BRAND SPANKING NEW VIRTUAL PLAY SERIES streams on Tuesday nights with a new work read by some of the Upstate’s most amazing actors. Explore some new playwrights, characters, voices, and social issues with us. Some of these plays are being considered for future production and your comments and input are encouraged.

We know times are tough during the COVID-19 pandemic, but if you enjoy this play, support our efforts to keep the Lights On at Proud Mary Theatre Company, South Carolina’s only LGBTQIA+ theatre company at proudmarytheatre.com 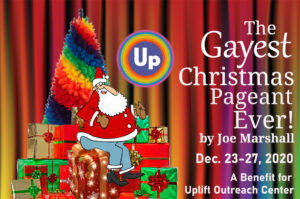