Proud Mary Theatre Company returns to the live stage this summer after a 16-month Covid-19 hiatus with two modern-day classics: The Laramie Project and Sordid Lives. Tickets on sale soon!

Both productions were scheduled for 2020 and were presented as critically-acclaimed virtual plays last year during the pandemic. Most cast members are returning to reprise their roles.

Head Over Heels, the bold new musical comedy from the visionaries that rocked Broadway with Hedwig and the Angry Inch, Avenue Q and Spring Awakening, follows the escapades of a royal family on an outrageous journey to save their beloved kingdom from extinction — only to discover the key to their realm’s survival lies within each of their own hearts. This laugh-out-loud love story is set to the music of the iconic 1980’s all-female rock band The Go-Go’s, including the hit songs, “We Got the Beat,” “Our Lips Are Sealed,” “Vacation,” Belinda Carlisle’s “Heaven is a Place on Earth” and “Mad About You.”

HE PINK UNICORN
One-Woman-Show by Elise Forier Edie
February 11-23, 2020
Trisha Lee (Kelly Davis from our production of FUN HOME) is a Christian widow living in a conservative Southern town. Her life is suddenly upended when her 14-year-old daughter Jolene announces she is “gender queer” and starting a chapter of the Gay and Straight Alliance at Spartan High School. In The Pink Unicorn, Trisha recounts her story about facing a crisis she never saw coming, at a time when transgender people and gender issues weren’t even on her radar. The Pink Unicorn is directed by Anne Tromsness.

VAMPIRE LESBIANS OF SODOM
by Charles Busch
October 25 – November 2, 2019
OFFICIAL UPSTATE PRIDE WEEK EVENT!
Vampire Lesbians of Sodom is a satirical play written by Charles Busch and features a series of vignettes that deals with the lives of two eponymous immortal vampire lesbians locked in eternal, if comic, antagonism after surviving the downfall of the mythical Biblical city in question, and crossing paths again in 1920s/1930s Broadway and Hollywood, and for one final showdown in Las Vegas in the 1980s.

Becoming features over 20 selections from some of Broadway’s newest shows, all centered around the theme of being different.

From “When I Grow Up” from “Matilda: The Musical” to “Out There” from “The Hunchback of Notre Dame,” and LGBTQ+ shows like “Kinky Boots,” “The Prom” and “Fun Home,” Becoming examines otherness through the eyes of nine amazing professional performers. 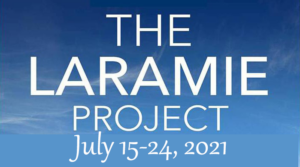