Watch our BRAND SPANKING NEW VIRTUAL PLAY SERIES on Tuesdays at 8 p.m. Explore some new playwrights, voices, social issues and even musical selections with us. Some of these plays are being considered for future production and your comments and input are encouraged.
Our Virtual Play Readings are TOTALLY FREE, but you can make a Donation at proudmarytheatre.com/donate.

About WHITE PICKET WIVES by Vivian Zelda Strong. Directed by Brook A. Nelson. It’s 1953, and Julia Fitzgerald lives the life of every suburban housewife’s dreams. But everything changes when her old friend Lizzie moves in down the street, and sparks feelings in her that Julia had long since denied. As their relationship rekindles under the darkening shadow of McCarthyism, Julia and Lizzie discover the murderous lengths they must go to to defend their forbidden love. TOTALLY FREE, but we always accept PayPal/Credit Card donations.
#spankingbrandnewplays #proudmarytheatre #whitepicketwives

In this surreal deconstruction of gender roles and their capitalist roots, G. I. Joe has “rescued” Barbie to his cabin. There, they go on a journey where they discover empathy, build a relationship, and raise a child together, all with no regard to the world they destroy around them. Satirical and visceral, this play will set your mind spinning.

Taylor Davidson (director and playwright) is thrilled to have her first full-length play chosen for the Proud Mary Virtual Play Reading Series. She appeared at Proud Mary as Ginny in Five Lesbians Eating a Quiche and has also performed at other theaters throughout SC and Georgia, including Live Arts Theatre, Lionheart Theatre, the Upstate Shakespeare Festival, Centre Stage, and Spartanburg Little Theatre.

Celebrate National Give OUT Day June 30 with the world premiere of A Straightforward Scenario, a play in one act by Hope Phillips.

Making Pleasure a Business (or The Pun of it All): This broad comedy pokes fun at the rites of passage as young Bo Bellamy, doubting his masculinity and interest in women, decides to change his virgin status with an older “woman-of-the-world.”

Teacher – Dr. Ted Noland and his prize playwriting student, Charlie Barrett, are at loggerheads. . The struggles of teacher and student, and Ted’s insight into clarifying the roles of each, offers valuable life lessons for both.

Makeover – Imagine that you are André Telfair, the famous artist/aesthetician of Makeovers by André, and into your salon comes mousey Caitlin Allgood wanting the complete “works”–a new image–as she is preparing for a book tour to promote her new book, How To Make A Man Happy. The only hitch: Caitlin is a nun. In this humorous and warm comedy, it’s hard to tell just who is getting the makeover.

Coming Out in Atlanta – Lenny Levinson is the Toast of Atlanta in his gig at The Moonlight Club where he is featured in a dandy drag impersonation of the young Liza Minnelli, and has never come out to his very traditional Jewish parents, Rosa and Sol. They learn about their gay son when they attend a performance.

ABOUT THE PLAYWRIGHT: C. Robert Jones is a native South Carolinian and a graduate of USC.  Over his theatre career, he’s been an actor, director, teacher, composer, and playwright.  In the southeast, his plays have been performed at such theatres as the Flat Rock Playhouse, the Barter Theatre, the Henrico Theatre Co. (Richmond, VA), the Academy and Art Station Theatres in Atlanta, Theatre Memphis, and his new comedy The Senator’s Wife recently had its premiere at the Tennessee Stage Co. in Knoxville.   Among his honors and awards are a David B. Marshall Award in Musical Theatre from the University of Michigan for his musical Rivals, the Robert Chesley Award (gay and lesbian theatre) for The Catbird Seat, and earlier this year he was named one of three honorees for the Robert J. Pickering Award for excellence in playwriting for his drama, The Salieri Effect.  He is a National Endowment for the Humanities Fellow at Yale University and the author of the delightful four-volume set of stories for children, Lanky Tales.   crobertjones.com

The Little Pony by Paco Bezerra and translated by Spartanburg native Marion Peter Holt follows a young couple grappling with their son’s traumatic bullying because of his My Little Pony backpack.

Upstate actors Ryan Hewitt and Libby Riggins star in this reading and Brigitte Carpenter directs. The Little Pony was inspired by events that took place in North Carolina in 2014.

Michael Morones, age eleven, was brought to the emergency room after attempting to hang himself from the bunk in his room because he could no longer endure the insults and attacks of his schoolmates. During the suicide attempt, Michael was without oxygen for several minutes, suffered permanent brain damage, and is in a semi-vegetative state. He was a fan of the animated series My Little Pony.

A month later, Grayson Bruce, nine years old, was forbidden entry into his school for carrying a My Little Pony backpack. The school principal considered it “inviting bullying” if the minor came to school with the backpack, even accusing the boy of having provoked “disorder in the classroom.”

We know times are tough during the COVID-19 pandemic, but if you enjoy The Little Pony, support our effort to keep the Lights On at Proud Mary Theatre Company, South Carolina’s only LGBTQIA+ theatre company at proudmarytheatre.com/donate.

Blue Camp is set at an army detention center on Treasure Island in San Francisco Bay during the early days of the Vietnam War as outed soldiers confront the hypocrisy of the military’s treatment of gay servicemen.
Watch BLUE CAMP now at https://vimeo.com/412543605/

“Blue Camp” © 2019, by Jack Calvin Hanna and Tim Caggiano, Playwrights.
All rights reserved.
The streaming of “Blue Camp” on Vimeo, by Proud Mary Theatre is for promotional and educational purposes only and in no way relinquishes any rights to the copyrighted original play, “Blue Camp” retained by the said authors. The Vimeo recording and video may not be saved to another format, copied by hand, reproduced in any way or shared beyond the Vimeo site without express written permission from the authors.
No claim to copyright is made here for any original U.S. Government Works.

About WHITE PICKET WIVES by Vivian Zelda Strong: It’s 1953, and Julia Fitzgerald lives the life of every suburban housewife’s dreams. But everything changes when her old friend Lizzie moves in down the street, and sparks feelings in her that Julia had long since denied. As their relationship rekindles under the darkening shadow of McCarthyism, Julia and Lizzie discover the murderous lengths they must go to to defend their forbidden love. TOTALLY FREE, but are accepting PayPal/Credit Card donations.
#spankingbrandnewplays #proudmarytheatre #whitepicketwives 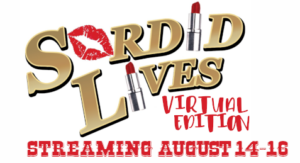